CATHY WILLIAMS ART
ASSEMBLAGE
Assemblage/sculpture is the world of art made from found objects.  My greatest delight in this life is bringing home a piece of rust found in the middle of an alley; or, finding a bone, or, an interesting piece of wood in the the forest and turning it into artwork.  Generally, this genre is loved by art enthusiasts who adhere by the adage, "Beauty is in the eye of the beholder."
​
'This work is definitely 'one of a kind.'

During a holiday in the Mayan Rivieria in Mexico, the coral for his head was found on an adventuresome trek. I immediately knew his name as I placed the piece in my backpack; my mind raced with ideas for his assembly.  His head is heavy, so, I attempted several different approaches for stability, balance, and aesthetics. All other components of his body were found that week in various public and obscure places.  He enjoyed participating in a juried group show entitled "Curio Cabinet", an exhibition of the unusual held at the Indianapolis Art Center in June-2017. 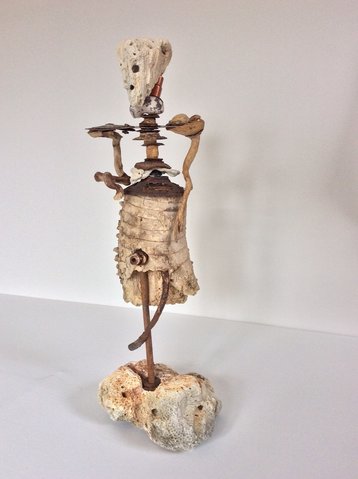 A femur bone (unknown origin) found along a woodland trail began the creative process for the body of this piece. She soon had wings attached from rusted antique cushion springs found in a discarded cistern. Her beautiful skull was once a lively small animal. She also is adorned with large and small bones of the spine of a deer found on a hike. The base(s) are interesting pieces of wood that spoke to me while running through the forest. 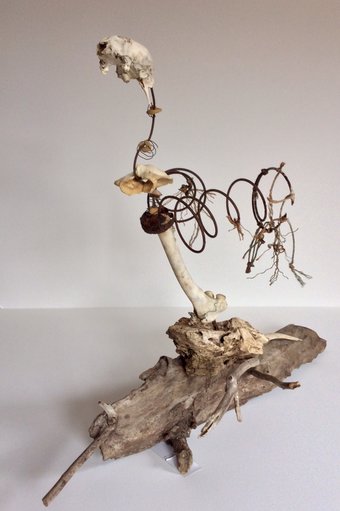 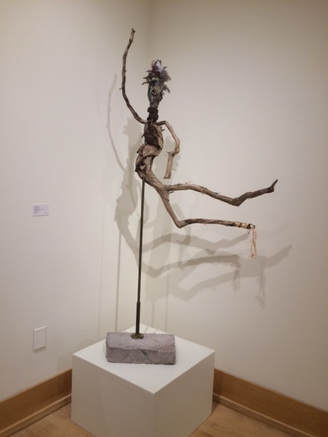 "The Breakup: It's Not Me, It's You"
​
This piece is an award winner: Best of 3D Assemblage/Sculpture (February) 2016 Indianapolis Art Center Show.
This unique individual is made from found organic objects and two purchased beads.